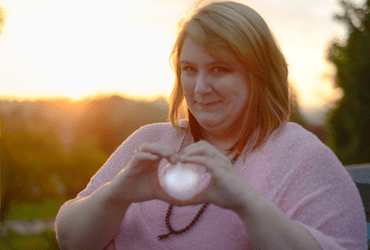 As we tip toe towards Valentine’s day, people have LOVE on the mind… but what many don’t realize is the role that they play in attracting the partner their heart desires.

I had a pretty big break up the year I turned 25. It was with the first guy I’d lived with, and the timing sucked and it propelled me into a quarter-century-life crisis, which is ridiculous… I was 25, heh. I believed my partner was my last chance at motherhood, and that that was “it” for me.

Boy was I wrong. 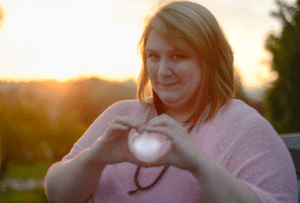 My romantic journey and spiritual journey were DEEPLY entwined… and I didn’t step onto my spiritual path until 2008. So those 3 years were a bit aimless for me, romantically. Lots of mistakes (which would carry on beyond those 3 years) were made because I had old, deep, buried hurts that needed to be healed.

My dad wasn’t the type to show he loved us. Sure, he said it, but actions speak louder than words. I don’t resent him for it anymore… my dad’s battling his own demons, and frankly, he learned to be a father from someone who didn’t do a great job at it… he did his best (as we all do), but it just wasn’t enough for my emotional development.

My mom and I are close, but we have a strange dynamic between us. It’s always been different than other mothers and daughters. We shared a lot, more than most probably do, which while that made us close, didn’t give the kind of structure that I needed for my development, especially in connecting with myself as a woman, my power, my confidence.

I will say though, that neither of my parents were the types who tried to force us to become something we weren’t, so I’ve always had a pretty strong sense of self.

So the healing… Wow…

I explored A LOT… my spiritual journey worked with meditation, with energy work (both bio-energy clearings and reiki), with plant medicine, with abstinence, with aromatherapy and crystals… the list goes on and on. And in these sessions, things would get a bit clearer. The light would shine into the dark spots where the hurt lingered… stuff I didn’t even realize was still IN there.

I struggled with feelings of inadequacy. If I’m honest, I still do, sometimes.) 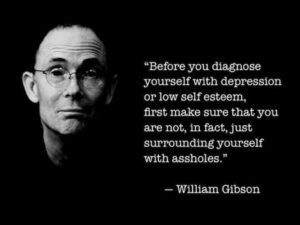 When I was 3, my younger brother wrote his name. And he wrote it before I did. Then in elementary school, despite them testing me for 6 years, I never got into the Gifted Learner’s program… my brother got in his first try and quickly dropped out. My identity was so wrapped up in being smart and bookish, that this destroyed me… and it played out in so many aspects of my life… but especially with romance. When my relationships would fail I’d look at everything I did wrong (or that I perceived that I did wrong). I’d beg for forgiveness and promise to change. And when whatever I did didn’t make things better or save the relationship, those feelings of inadequacy grew. It never occurred to me that maybe I wasn’t the problem… or that I was maybe only PART of the problem. I pursued men who were unavailable (in EVERY sense of the word) because unconsciously I knew it could never work out, and I’d feed that feeling of inadequacy. Each failed relationship provided proof to my little heart that I wasn’t good enough and that I was unworthy of love. This was actually a massive shift that took place once I began my spiritual path. I learned that we are ALL worthy of love, yes, even me. I could see the roles I played in the failed relationships AND why I played them. And I could see myself with kind eyes. And I could forgive.

Forgiveness played a massive role in my quest for romance.

I started off with a letter written to the Divine Mother, and in it, I asked for a “Grand Romance”. I cried as I typed the letter. So much energy was moved and released. I described what the grand romance would look like, but then the letter took a turn. I described the things that had gotten in my way of finding it. I owned up to my mistakes and I forgave myself for them. I committed to getting clearer on what I wanted, and to continue exploring my contribution to the successes (and failures) that unfolded.

And then I waited.

My next couple of relationships also ended. I lost a couple of friendships too, both with men who were basically boyfriend surrogates. (Something I learned: you need to make SPACE for what you want. If you’re turning off loneliness by filling up that space with your career, casual sex, or just boyfriend-like friendships… it’s not going to happen.) Each time it ended, I wrote a new note to the Divine. More forgiveness. More clarity. Gratitude for the lessons. And of course more tears.

Before I met my husband, I ended a long distance relationship, just before New Years. I held a fire ceremony by myself to celebrate on NYE, and released all the hurt and disappointment I felt towards him. Shortly after, I hand-wrote a 4 page list of every single thing I wanted in a partner. I covered EVERYTHING. Physical attributes, emotional support, his own baggage, sex drive, things we’d do together, all of it. I don’t think any of my previous lists had been so clear and comprehensive. And then one afternoon, in an old 90s text-based chat room that I’d been going on since I was 14, I met this sweet, bumbling man, and it was pretty much love at first type. 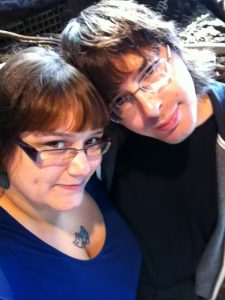 That was certainly my experience. I felt drawn to him from moment one… he is British and quite reserved but accidentally slipped up that he loved me about 2 weeks into our conversations. We spoke every day, met in person 2 months later, and when I found him at the airport, even though his back was turned to me and all I had was a mop of messy hair to identify him by, I knew it was him. And when we hugged the first time, I knew I was home. We were engaged a month after that (3 months after our initial meeting), and we eloped another 3 months later (6 months after meeting) and we’re going strong nearly 3 years later. He is everything but 1 thing on that 4 page list…. but even that one thing (he’s an athiest, not spiritual), he’s SO supportive of my path and even speaks my language. I tell him I manifested our love, he jokes that he’s basically ectoplasm. We’ve survived long distance, a continental move, a messy immigration, the daily married struggles with parenting, budgeting, stress, etc PLUS we both work from home so we’re pretty much inseparable, and we get closer each and every day. That would not have been possible if it wasn’t right.

And if anyone tells you that 4 pages of requests in a partner is too much, that your standards are too high, you tell them that’s bullshit. Your contract with the Divine is a personal one – you go out and ask for whatever you need.

It all begins with YOU, sweet one. And trust me, even with the love and companionship of an amazing husband, I can still say that self-love is the best love.