Pick a card, any card

As a member of a lot of online spiritual communities, and the host of my own space, I get this question a lot: what’s the difference between tarot and oracle cards? And the follow ups: which one is better? which should I use? Over the years I’ve found myself writing long posts to answer this question, and I started finding myself skimping on going into it fully (partially because I’ve answered it so many times, and partially because I get lazy typing with my thumbs), so I thought it would be worthwhile to devote some time to a complete answer here, and then I can link to it when the question gets asked in the future.

And let me say: I get it! Oracle cards in particular have become so popular recently (it’s even so easy to make your own now) that with the rise in familiarity, people want to make sure they’re doing it right. So let me assure you with this: if you feel called to it, then you’re doing it right.

But that’s now what you came to hear, so let me break it down a bit further for you.

Tarot follows a specific structure with two categories of cards, the major arcana and the minor arcana. While the artwork, and even language used to describe these cards will change from deck to deck and creator to creator, the underlying structure remains the same. The major arcana has 22 cards which dig into our bigger picture, karmic lessons, while the minor arcana has 56 – divided into 4 suits, looking more at the day to day experiences of being human.

Traditionally, the minor arcana broke into 1-10 with 4 court cards: king, queen, knight and page, but more modern creators have switched this up the language to be non-gendered or even familial. The Wild Messengers Tarot for instance has the seeker, the initiate, the teacher and the master. The Naked Heart Tarot uses child, youth, mother in lieu of the royal iconography. Modern and traditional versions of these archetypes are not better or worse than each other – it’s all about what’s resonant for YOU. You’ll want to find a deck that feels good, that has imagery you love and can relate to, and it can be as serious or as lighthearted as you like.

I received my first tarot deck for Christmas in 1994. It was a Hansen Roberts tarot, very cute with young imagery, and it was very accessible for a teenage kid who was figuring this out on her own. I had learned to read playing cards originally when I was 12, which maps directly onto the minor arcana of the tarot deck – diamonds were pentacles, hearts were cups, spades were swords and clubs were wands. I didn’t get much guidance to learn, beyond the booklet included, and there wasn’t YouTube or Biddy Tarot back then, so I didn’t have a lot of support. My deck actually still has little pen marks where I jotted down keywords for each card and the reverse meanings, because I didn’t understand the symbolism, and didn’t trust myself to know. I figured memorization was the name of the game…. but what I discovered was a whole lot more.

They’ve been wrapped in that same piece of silk since the mid-90s. Notice the little penned notes written on them.

If tarot is rooted in tradition and structure, oracle cards are the free-spirited younger sibling. They’re created with specific themes that range from literally anything you can dream up… fairies, goddesses, starseeds, moon phases, fantasy cats (no, that wasn’t a typo)… the world really is your oyster. There is no consistency with the number of cards, the type of messaging, or the iconography. Really, anything goes.

I’ve witnessed decks with zero imagery and be just words or language to prompt some reflection. I’ve seen decks that have no words – are strictly imagery, sometimes without much of a write up in the guidebook so the onus is on the reader to really connect to the energy of that card’s message. There’s a lot more flexibility to this format, with new decks sprouting up over the internet every day.

I didn’t discover oracle cards until my late 20s. My first oracle deck was Cheryl Lee Harnish’s Path of the Soul which included fractal art that created more of a feeling than a story. I took this deck everywhere – helping people at my shamanic ceremonies understand the theme of their journey, even at my desk as I would prepare for the energies of the day. (I will never forget the day I was laid off from corporate – the card I pulled let me know that change was coming, but everything would be okay, and 15 minutes later, all of my security would be yanked out from under my feet. But it definitely did end up being a-okay.)

I now own a couple dozen decks, each used for different purposes, but most being used in women’s circles. I have 3 workhorse decks that I tend to lean on most. The first is Kyle Gray’s Keepers of the Light (with the archangels pulled in from his Angel Prayers oracle). I use this in all my client sessions , in my energy forecasts that happen in my Facebook community, and in my own readings, unless otherwise advised by my guides. When I’m looking at stuff for my business, especially with creative blocks (or money blocks) I am such a fangirl of Chris Anne’s Sacred Creator’s Oracle. There was a time when I intended to create a similar deck, and when I saw hers, I messaged her to thank her because now I didn’t have to. It was everything I envisioned and more. Lastly, when it’s life or relationship type stuff, I love Colette Baron Reid’s Wisdom of the Oracle. The artwork is breathtakingly whimsical, and the messages also go straight to the heart. I especially love how long each card’s write up is, and how she treats upside down cards as self care messages… cause we could all use some of those. 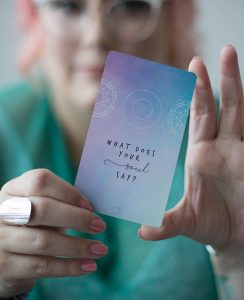 This juicy nugget is from the Sacred Creator’s Oracle

For me, tarot tends to be more about prediction, and oracle cards tend to be more about advice. (Though they can definitely be predictive too, those are just not the types of readings I like to do.) So choosing whether to work with tarot, oracle, or BOTH is entirely up to you, and what the task at hand is.

Here is the advice I will give you though: don’t be swayed by FOMO. Whenever a big deck is released, you’ll see a lot of your favourite people on social media talking about it extensively. Influencer marketing is HUGE in this realm, and if you don’t live in a town with a new age shop and you need to order online, it can be easy to get swept up in the hype.

In an ideal world, you’d go into a shop, touch them, see how they feel, and how the imagery speaks to you. I literally feel my hand light up with heat when there’s a deck in the shop that calls out to me. This isn’t always the case, so if you ARE shopping online, don’t rush the process. People post regularly on Instagram and YouTube and love doing unboxings where you can get a good feel for what’s inside the deck. Don’t feel like you have to buy the latest from a creator you once loved… follow the energy and only invest in the deck(s) that feel most aligned for you.

Connecting with your deck

Rituals and blessing ceremonies are becoming more and more commonplace with new card deck releases, some creators even put together a how-to in their guidebooks. When I was a teen, learning to connect with my deck, the first thing I did was just give it time and energy before asking it to provide me with any guidance. I’d carry them with me everywhere, shuffle them even if I was just sitting and watching TV, and I’d sleep with them under my pillow the first few nights, and store them in my nightstand afterwards. We were bonding, forming a new relationship, and really connecting. I showed I was in it for the long haul, committed, and I gave the deck so much love before asking it to show up for me in any way.

There are traditional spreads that are universal for every deck, regardless if you’re using tarot or oracle cards. The celtic cross is probably the most common of them all. Inside the guidebook of your deck, there will likely be some spreads that the deck creator has put together for you, and they can usually be used with any deck as well. I highly encourage you to create your own, once you’re comfortable working with your deck and have established a good connection to it. I regularly get downloads of spreads (some of which I share on social media, on this blog, or my Pinterest board) and they always become more meaningful when they’re personal to me and what I’m experiencing at the time.

To be honest though, despite being a Certified Angel Card Master, most of the time I don’t use a spread. I ask my guides to tell me how many cards I need to understand a situation, and then I pull them and allow them to tell the story. The structure of a spread really supported me in the earlier stages of my development, but with time and experience I’ve found it a lot more liberating to ‘riff’ off the cards and allow them to speak to me and through me. What I love about this is when I’m doing group readings, I can pull the same card for multiple people, but the message will come through differently. In this case, the card becomes a bit of a prop, but is the initiator of the message that most needs to be heard.

Other ways to use your cards

Whether they’re tarot or oracle, doing readings aren’t the only ways you can work with the energies of the cards. Here are a few other ideas:

Cards, crystals, and more in a travelling altar

Also, something you may not know is that MANY of the artists behind your favourite decks sell merch with the artwork. Prints are probably the most common, but you can get phone cases, tote bags, shirts and more. If there’s a particular piece that really speaks to you on a deeper level, I highly suggest looking up the artist to see what’s available.

I hope you found this to be so helpful and that it sparks a bit of inspiration within you. Let me know in the comments whether you’re team tarot or team oracle, and which decks are your absolute faves!

PS: I’ve linked to a TON of outside content in this post, and some of them are affiliate links. Should you purchase from them, I may receive a small compensation, but please know that I only suggest products I believe in.

I'm Seryna! I help women on the precipice of greatness take big leaps of faith to create freedom, and impact beyond their local PTA. My signature framework of angelic messages and wisdom from the Akashic Records intuitively guides my clients to create lives and work with purpose, on purpose.